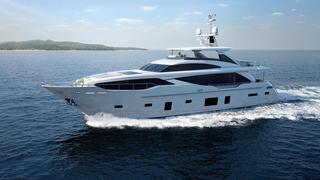 Two former employees of luxury yacht maker Princess have been found guilty of defrauding the company of more that £1 million. Following a trial that lasted almost three months, the jury took eight hours to unanimously convict them on all counts.

Glyn Thompson, the yacht builder’s former facilities manager, was convicted of masterminding two complex fraud schemes between 2010 and 2013. He was sentenced to six years in prison. His co-defendant, Darren Tallon, was convicted for two counts of plotting to defraud the firm and handed a four years and six months prison sentence.

Both denied the charges but showed little reaction as the verdict was announced. According to the Plymouth Herald, the residing judge told their barristers: “as an act of compassion, your clients can have bail, but with the level of fraud we are talking about here, custodial sentences are inevitable”.

Among the allegations were claims that Thompson inflated the cost of work on a slipway at Devonport Dockyard’s South Yard, for which he charged £567,000, to siphon money from Princess. It was also claimed he plotted with contractors to set up false invoices, billed for work which was not completed and, along with his assistant Roger Truen, accepted bribes from firms in exchange for valuable contracts.

Early on in the trial, Princess’ former finance chief Ian Duffin said the company’s bosses had no idea there was anything wrong until they received an anonymous email in July 2013 tipping them off.

“There was a huge level of trust between the members of the management team,” Duffin explained. “We respected each other.”

Three other former Princess employees, John Tinley, Michael Honey and Roger Truen, all pleaded guilty to the charges against them and were given prison sentences. Truen was handed a 40 month sentence, whilst Honey and Tinley were given 14 months suspended for two years.

Boater who faked his own death surrenders to police