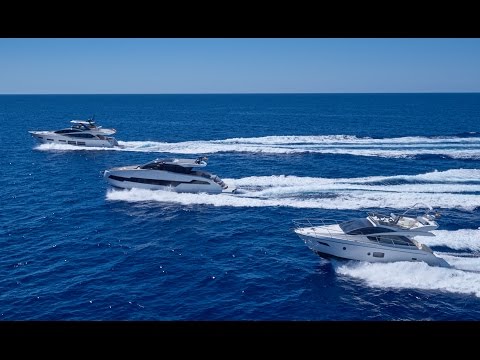 The fourth hull in the Astondoa 80 GLX superyacht series has been launched in Spain, the yard has announced. Built to order, the new 24.92 metre yacht was recently shipped across the Atlantic to Florida, where its new owner is due to take delivery.

As the video above shows, the new 80 GLX was joined by two smaller models, an Astondoa 44 Fly and an Astondoa 655 Coupe. All three are due to go on display in November at the Fort Lauderdale International Boat Show, as part of the Astondoa's centenary celebrations.

However, it is the 80 GLX that is likely to attract most attention with its flared flybridge that creates a full-beam sundeck back. A davit crane means that this area can be used for tender storage.

Interior styling is by Cristiano Gatto, who has created a contemporary décor with leather sofas in the saloon and light oak wood panelling. Accommodation below decks includes four en-suite cabins for a total capacity of eight guests.

Other key features include a shaded foredeck seating area and an extended bathing platform for storing a Jet Ski.

Built from GRP, this fast-planing yacht is capable of a top speed of 33 knots, thanks to a twin 1,550hp MAN 12V drivetrain. When trimmed back to the fast cruising speed of 28 knots, the Astondoa 80 GLX has a maximum range of 400 nautical miles, thanks to a total fuel capacity of 5,800 litres.

The new 80 GLX follows on from Sophye, the Brazilian-inspired superyacht, which Astondoa launched back in January.