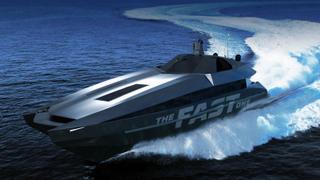 The world record for the fastest powerboat circumnavigation could be under threat from a new German project backed by the University of Bremen and due to launch in 2020.

Currently known simply as The Fast One, this 24 metre catamaran design by Hendrik Weber is being developed in accordance with Union Internationale Motonautique regulations, meaning that both the Suez Canal and Panama Canal will have to be crossed as part of the record attempt.

Pete Bethune of New Zealand holds the current record of 60 days 23 hours 49 minutes, which was set on board the 24 metre trimaran Earthrace in 2008. However, The Fast One hopes to shave more than 20 days off that record by using a unique hydrofoil arrangement developed by Professor KGW Hoppe, which should allow for cruising speeds in excess of 40 knots in all conditions.

What’s more, advanced scanning equipment will be used to help spot any potential floating debris that could pose an obstacle to such rapid progress. The maximum speed has yet to be disclosed, but The Fast One should be able to give the world’s fastest superyachts a run for their money.

The team behind this highly ambitious project add that the naval architecture could be used in a wide variety of applications, from search and rescue vessels and ferries to high-speed motor yachts measuring up to 48 metres.

The German maritime search and rescue association DGzRS has already lent its support, and commercial sponsors interested in backing this venture are now being encouraged to come forward as the construction stage nears.

Other challengers for the crown of world’s fastest powerboat circumnavigation include Alan Priddy’s Team Britannia, which is currently targeting an October 2018 departure date after more than three years of research and development.