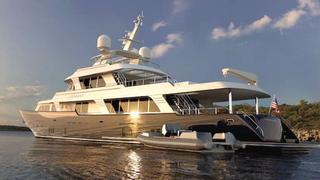 The superyacht, which has formerly been known as Ragazza, Hiba and Aruba II, was originally built by CRN in Ancona, Italy, in 1979. The extensive refit will include a four-metre aft extension that will mean she will measure more than 39 metres. In addition to gaining length, Sylviana will be given a new modified superstructure forward on the main deck.

There will also be an extended bridge deck lounge created and a completely new upper sun deck. A main focus of the project is to increase ceiling heights on board the vessel as well as to create the capacity to store larger tenders. Subsequently, the revamped yacht will benefit from plenty of newly created recreational and sunbathing space. From a design aesthetic, Guido de Groot is working on bringing her lines up-to-date without neglecting her classic heritage and style.

Guido de Groot Design won the Interior Design Award for semi-displacement motor yachts in our Showboats Design Awards 2013. The award recognised Guido de Groot's work on Diamond. The design house, based on the canals of Leiden in The Netherlands, launched in 1997.