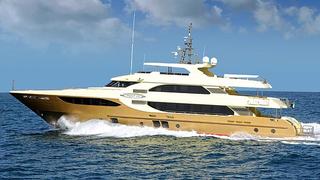 We announced the launch of the first Majesty 135 in February, and now Gulf Craft sends news that the second hull of this series is on order.

The Middle Eastern shipyard has been very busy since the beginning of the year with no less than four major launches. Riding the wave of this success, Gulf Craft had anticipated the sale of the second Majesty 135, and started the construction of the hull earlier this year.

The Majesty 135 is the flagship of the yard. Bureau Veritas classed and MCA compliant, this new composite series has a length of 41.05m. The naval architecture and exterior styling are by the in-house team at Gulf Craft. Her standard version accommodates 10 guests in a full-beam master suite on the main deck and four double cabins on the lower deck.

Erwin Bamps, COO for Gulf Craft, concluded: 'The superyacht will be semi-customised to the owner’s requirements and is scheduled to be handed over in the second quarter of 2013.'