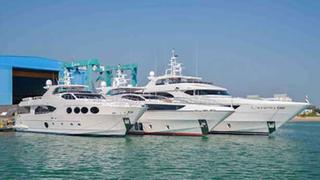 Gulf Craft launched three of its Majesty super yachts in a week's time.

The boats, which were a Majesty 105, a Majesty 122 and a Majesty 135 are from the UAE-based builder’s luxury flybridge superyacht range. Gulf Craft is scheduled to launch its newest flagship, the Majesty 155, in May 2015, and Boat International was the first to report Gulf Craft's second order for a Majesty 155 superyacht.

Erwin Bamps, who was named [Gulf Craft CEO](href=) last summer, says, “This achievement of putting three of our Majesty Yachts into the water in such a short time further underlines Gulf Craft’s growing credentials as an international superyacht builder. We have truly made our mark on the global superyacht scene through our innovative approach to design and manufacturing, allowing us to offer a unique standard of product and service to our global customers.”

“By displaying the Majesty Yachts at three major industry events in three different countries, Gulf Craft is again extending its geographic reach, and helping to promote and strengthen the reputation of the UAE in the luxury yacht market,” says Bamps.

He highlighted the customisation possible with each Gulf Craft, saying, “What we do is more than build boats and yachts; it is essentially designing and developing works of art. Every feature of the vessel is created in our factory, ensuring that all facets meet our high-quality standards, and allowing clients to customise their yacht according to their requirements.”

Gulf Craft is investing $100 million over the next five years in a facility for the manufacturing of mega and superyachts at Dubai Maritime City, the company has said.