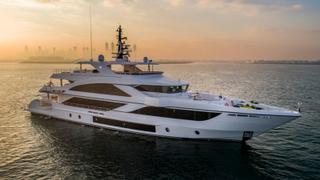 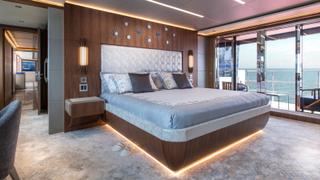 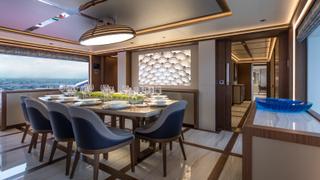 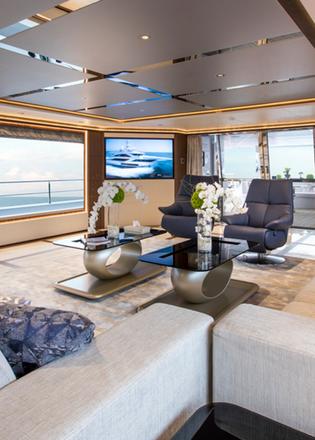 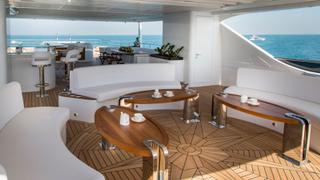 Gulf Craft has released new images of its latest model, the 42.67 metre Majesty 140.

It comes after the tri-deck motor yacht was unveiled during the the opening day of the Dubai International Boat Show in February.

The Majesty 140 has a total interior volume of 360GT and features a first for Gulf Craft — a reverse-angled wheelhouse, which adds to the purposeful profile.

Mohammed Hussain Al Shaali, chairman of Gulf Craft, previously said: “The Majesty 140 is a continuation of our three and half decade long commitment to creating yachts and boats in accordance with the world’s best standards, carrying the Made in UAE flag with pride.”

Accommodation on board the Gulf Craft Majesty 140 is for up to 12 guests in five cabins, including a main-deck owner’s suite complete with a fold-out superyacht balcony and an en-suite Jacuzzi bathtub. Meanwhile, the crew quarters is split between the bow and the aft of the yacht — giving a total capacity of nine people.

Take a closer look at the Gulf Craft Majesty 140 yacht

Key interior materials include Italian leather, Onyx Costa Blanca marble and crystal door handles. Extensive use of glazing provides a dual benefit; both lightening the interior and offering panoramic views out to sea.

The open-plan saloon on the main deck includes an L-shaped wrap of seating and a dining area for up to ten guests, while other key features include a superyacht beach club and a skylounge that measures 55 square metres.

Power comes from a pair of 2,600hp MTU diesel engines that give the Gulf Craft Majesty 140 a top speed of 20 knots.

Other superyacht projects currently under development at the UAE-based yard include the flagship Majesty 175 project, which is due to hit the water in 2019.