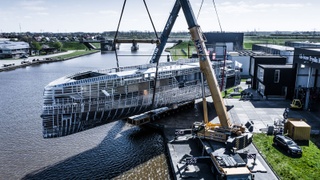 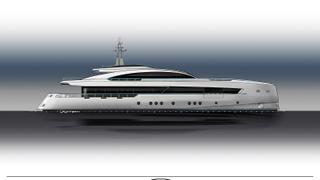 The 45 metre Hakvoort motor yacht Project Adur has emerged from the sheds for the first time.

The event marks the first construction milestone since the keel laying ceremony which took place in December 2018. The Dutch shipyard announced the sale in October 2018 following the Monaco Yacht Show where the project was first revealed.

Built in aluminium to a design by Omega Architects, Project Adur will feature a “sporty” exterior design and is set to be completed in spring 2021. Van Oossanen Naval Architects has designed the hull, which will be fitted with a Hull Vane patented ‘spoiler' for more efficient fuel consumption.

Accommodation will be for eight guests across four cabins comprising an owner’s suite featuring a private office on the main deck and three further guest cabins on the lower deck. Other key features include a gym, flush stern, aft and forward submarine storage and hybrid propulsion for a "dolphin friendly silent mode."

Power will come from a pair of MTU 12V 4000 M93L engines for a top speed of 26.5 knots. The yacht will also be fitted with two electric booster engines and will have a cruising speed of 12 knots with a range of over 3,800 transatlantic miles. The 45 metre yacht will have an 8.4 metre beam and 2.5 metre draught.

Ocean Independence is managing the build and the yard revealed that the owners have been "heavily involved" in the design process. They specifically wanted a yacht with long range and high speed while high privacy was also a key requirement.