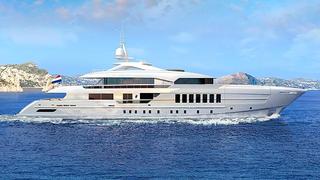 Remember that Heesen conference 'the future is now' during the Monaco Yacht Show 2012? The designs of three models were presented, including the 42m fast displacement motor yacht with a Hull Vane®, which was sold by Heesen in May 2012. A even larger model, a 55m fast displacement motor yacht, was revealed during the same conference and today Heesen is proud to announce her sale.

This new 55m, currently known as hull number 17255, becomes the largest fast displacement motor yacht built in steel and aluminium by Heesen. She's designed by Omega Architects, and her naval architecture is by Van Oossanen and the in-house team.

This new concept is designed to go faster but use less fuel, to increase range and speed, to increase performance but reduce environmental impact, to enable uncompromised interior design without compromising performance.

The interior accommodates twelve guests in six cabins. The master suite is on the main deck and features a 70msq private balcony. The other guests cabins are on the lower deck, including a full-beam VIP, two doubles and two twins.

Special features also include tender garages located forward on the yacht, releasing the lazarette to become a large beach club and gymnasium.

Heesen Yachts has 13 projects currently under construction (seven aluminium and six steel). The hull 17255 will be delivered in summer 2015.