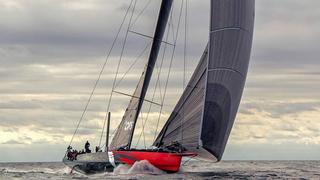 Hodgdon Yachts launched its carbon racing superyacht Comanche in September, and now she has been photographed under sail. We hear from Comanche's Skipper, Ken Read, on her speed-demon capabilities and record-breaking goals.

This 30.48-metre sailing yacht was built for pure performance. According to Read, superyacht Comanche is designed to, 'finish first in whatever race she is entered – and break the record when weather cooperates.' Ratings were not a priority, quite the contrary. The designer's instead had a brief to make her so fast and so ahead of the competition that she would be worst-rated boat in history in IRC and ORR racing, and if not, then they failed.

You won't see Comanche racing around the buoys often, she wasn't built for this as she draws more than six metres, and she has massive sails to boot. 'It's hard enough to get sails up and down in this boat offshore when there is time,' Read says. Buoy sailing will happen from time to time, which will help in training for offshore, but at the end of the day, this is an offshore boat, where you can, 'let her out of her cage and do its thing – and hopefully that’s go from point A to point B very, very fast!' says Read.

Comanche promises stunning performance, and if achieved, it will all come down to her design and execution. 'The build team, led by Branden Litton, Tim Hackett and Casey Smith combined with Hodgdon yachts and their personnel and their resources, really turned out an unbelievable machine,' Read says. Every weight estimate was made or beat to keep her lightweight and nimble.

After leaving Hodgdon, Comanche received her rigging and sails from Southern Spars and North Sails, respectively. One thing that's instantly noticeable is how far back Comanche's mast is set, well beyond 50 per cent aft of the bow, which is further than any monohull. This is designed equally for balance as it is for reaching and running. The sails from North Sails 3DI Raw sails are a bit of a 'radical departure' as well, Read says. ' reasonably new refined process, have shaved about 15 per cent out of the sail weights.'

'It still amazes me to see how far along the designers for Southern Spars and North Sails have come in their integration into the entire design process,' he says. 'We can’t call any of these people boat designers, or boat engineers, or mast designers or sail designers, anymore because they really throw themselves into these projects and do far more than what has ever been done in the past with regard to computerised testing, drive force coefficients, integrating mast and sail to righting moments and side force moments of the appendage package.

'All of the integrated pre-work in the design phase allows us cut out a bunch of preliminary steps. For example, when they tune the mast and set the tensions on each set of shrouds of a 149-foot 4-spreader carbon fiber rig, there is no more traditional process of pull on, two turns here and ease a half turn there. I would be very surprised if it doesn’t completely match the predicted loads on each set of shrouds. So there’s no more elementary steps on the water such as going out to tune the mast – the mast is tuned. So we can just go sailing.'

And go sailing they have as we can see in the stunning photos above. It looks like Comanche's Skipper Read and crew are enjoying putting this racing machine of a yacht to the test so far, and the first official test on the race course will come soon in this year’s Rolex Sydney to Hobart Race.