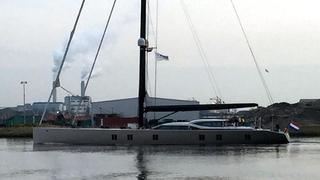 Skade, the latest yacht to come out of Holland Jachtbouw’s yard, has been delivered to her owners.

The 46-metre performance sloop Skade was recently launched at Holland Jachtbouw’s yard near Amsterdam and was photographed as she was put through her paces on the water (pictures below).

Skade’s naval architecture was carried out by Tripp Design, which, true to its mission statement of creating yachts that “marry style and comfort with speed and safety” appears to have produced a yacht capable of global cruising.

First sightings of Skade suggest similarities with other collaborations Tripp has had with European yards, including Sarissa, launched by another Dutch yard Vitters in 2011. These similarities include the pilot house, clean foredeck, central cockpit, double port lights and even the paint finish. Skade’s lifting keel will also reportedly have the same shallow draft of 4m, along with a deeper maximum draft of 6.5m.

The hull and superstructure of Skade were constructed in aluminium, with the deck completed in teak. The emphasis on cruising for Skade is reflected in her displacement of 235 tons and the cockpit protected by a rigid awning.

The interior work on Skade has been completed by a team from the British design company Rhoades Young.

More information about Skade, which was commissioned in 2013 and has room for six crew, will become available in time, but suffice it to say she comes from a yard whose pedigree in producing quality sailing yachts is unquestionable.