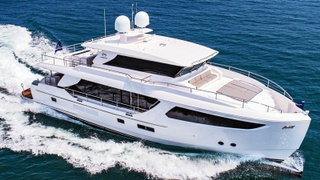 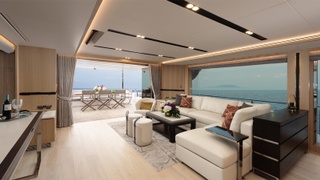 Taiwanese yard Horizon Yachts has delivered the second hull of its FD77 series to an Australian owner.

The 23.4 metre yacht is the first of the range to be delivered to Australia and the first Skyline model in the series. She will debut at the Sanctuary Cove International Boat Show later this month.

According to the yard, the yacht incorporates features which “characterise the FD series”, such as large sections of floor to ceiling windows, and a “high performance piercing bow design”.

These comprise a main deck master, with a large en suite and seating area with a sofa. The remaining three guest cabins are located on the lower deck; a VIP, double and twin.

The main saloon has been described as sporting a “bright and contemporary décor” with a convertible dining table that can fold up into a breakfast bar. The galley meanwhile can be separated from the saloon via privacy doors.

Other key features include an enclosed skylounge featuring a bar, Jacuzzi and grill and a beach club equipped with a swimming platform.

News of the delivery comes after the yard announced it had launched two RP110 yachts named Wild Duck and The Legion.