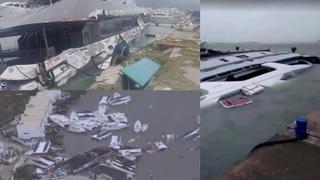 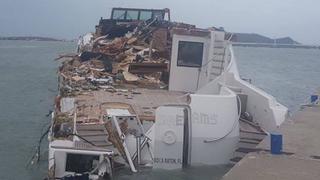 Hurricane Irma, the most powerful North Atlantic storm since 1980, has brought widespread devastation to the Caribbean, with yachts and marinas counted among the wreckage as 165-knot winds battered several island communities.

The Red Cross, which has launched a humanitarian appeal, described the impact as "catastrophic" with an estimated 1.2 million people affected. This number could rise to 26 million with the storm expected to hit Puerto Rico, the Dominican Republic, Haiti, Cuba and Florida over the coming days.

Barbuda and St Maarten were among the worst affected areas, with the governor of the British Virgin Islands Gus Jaspert confirming multiple fatalities and declaring a state of emergency.

Several yachts have been reported as destroyed, including the 40 metre Mondomarine superyacht Sierra Romeo (pictured above left) and an as-yet unidentified Benetti Delfino 93 (pictured above right). Meanwhile a crewmember from the Westport 112 yacht Pipe Dreams shared the image below on Twitter and confirmed that all of the crew were safe.

Despite warnings to evacuate, yacht owner Richard Branson refused to leave his private retreat of Necker Island, instead taking his staff to a reinforced bunker.

Writing in a blog post on the Virgin website, Branson revealed: “All of the team who stayed on Necker and Moskito during the hurricane are safe and well. We took shelter from the strongest hurricane ever inside the concrete cellar on Necker and very, very fortunately it held firm. Our thoughts go out to everyone affected by the disaster elsewhere in the BVIs, Caribbean and beyond.”

According to AIS data, his 32 metre CMN catamaran Necker Belle is currently moored in Granada, although Branson did not reveal whether it had sustained any damage during Hurricane Irma.

Meanwhile, yacht insurer Pantaenius has urged affected owners to get in touch as soon as possible with the last pictures of their yacht before the storm hit.

Benjamin Maltby, consultant barrister at Keystone Law, added: "It is surprising how many superyachts remained in the Caribbean this time of year, in locations where there is insufficient time to remove vessels out of harm’s way once warnings have been issued."

To donate to the British Red Cross' Hurricane Irma appeal click here and for information on how to volunteer aid through the American Red Cross click here.