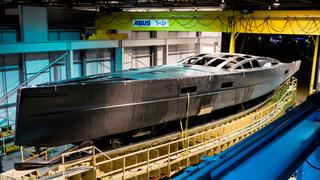 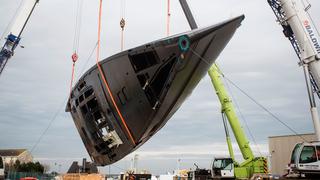 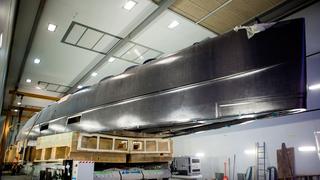 The 32.5 metre high performance sloop 3075, designed by Malcolm McKeon Yacht Design, has reached an important landmark in its construction with the carbon hull being turned ready for final assembly.

The shell has been built at Green Marine in the UK and required four large cranes to turn it over. Following final assembly and post curing the yacht will be shipped to Vitters Shipyard for outfitting. Delivery is scheduled for late autumn 2016.

The project is tightly under wraps, but the carbon composite hull has been designed to meet the required brief for racing capabilities, and much attention has been placed on sailing performance.

In this vein, the design was extensively tank tested prior to construction in order to best optimise the hull shape and appendage configuration.

The interior, by French designer Remi Tessier, will also be lightweight to keep the racing performance at a premium. The virtually all-glass saloon canopy will add an airy feeling to the interior.

Vitters has built many high performance sailing yachts, including the recently delivered 46 metre Unfurled. The Dutch yard is currently constructing the new J Class Svea as well as being involved in another carbon yacht collaboration with Malcolm McKeon Yacht Design - known as 3074.

The order for the 33 metre sailing yacht 3074 was signed in 2014. It features interiors from Design Unlimited and a Green Marine built carbon hull. Delivery is also scheduled for 2016.

First pictures of Svea the new J-Class yacht from Vitters