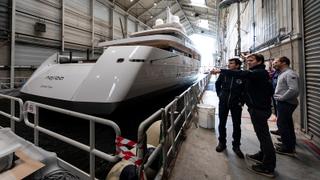 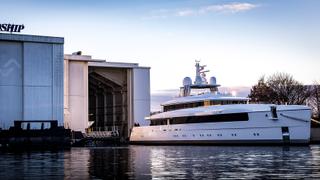 Inside Najiba: How the 58m Feadship came together

On January 3, the 58 metre freshly christened FeadshipNajiba became the first superyacht of the year to hit the water. Now owner’s representative and co-founder of yacht management company MCM, Peter Wilson, has lifted the lid on the challenges he faced overseeing the project.

MCM’s involvement in the project began with a phone call from Philippe Briand’s office, which was responsible for Najiba’s naval architecture. The client wanted to build a 58 metre Vitruvius-designed superyacht, Wilson was told, and was seeking representation.

“We saw this is a great opportunity to be involved in a really special project,” Wilson said. After impressing the client with an initial proposal, MCM was selected to oversee the project and immediately began the shipyard selection process. Dutch yard Feadship were soon chosen and Wilson’s next job was to represent the client’s interests throughout the construction, launch and delivery of the yacht, the latter of which is scheduled for next month.

MCM was tasked with managing the design process, from the initial general arrangement planning down to the minute details of Studio Liaigre’sinterior design. Often this meant knowing when to draw a line under the ever-developing design.

“Interior designers are creative people and will keep on generating wonderful new ideas given the opportunity. Sometimes our job involves knowing when to say “Basta!” (enough) as we do have construction schedules and drawing delivery schedules that need to be adhered to,” Wilson said.

During the process Wilson worked closely with the owners, who were “intimately” involved in the design and build process of Najiba. This included “convincing” the owner to build both the hull and superstructure in aluminium.

“The owner was initially on the fence, as he felt a yacht of such substance would typically have a steel hull and aluminium superstructure.” However, a combination of “detailed studies, research and long discussions” managed to convince the owner that an all-aluminium build was the right way to go.

Wilson admits the process is much “easier” with hands-on clients. “Some clients just want to be called when the job is done; others want to be involved in every nut, bolt and door handle, but I have no doubt which is the more rewarding,” he said.

A key part of this involvement meant meeting with the owners multiple times during the build process, notably at Vitruvius’s London office, the Liaigre studio in Paris, the shipyard in Holland and at the Monaco Yacht Show.

The benefit of this involvement worked both ways, Wilson said, helping the owners as well as the yacht management team. “I think their involvement made the whole experience more enjoyable for them and will ultimately enhance their use of the yacht and sense of accomplishment.”