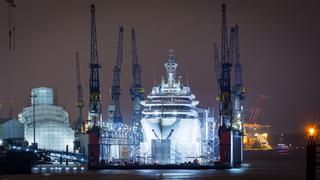 Is Eclipse having another refit?

Roman Abramovich’s 162.5 metre superyacht Eclipse has been spotted at the Blohm + Voss yard in Hamburg, Germany, leading to many rumours of a refit.

According to German press, Eclipse is being overhauled and rebuilt. But we can’t confirm any details of Eclipse’s refit as she’s a very private superyacht and Blohm + Voss were unable comment.

Instead, we bring you a photograph of Eclipse in the floating dock at the Hamburg yard. The photo below was taken by German photographer Juergen Schepers.

Eclipse, which was delivered by Blohm & Voss in 2010, has been in the Hamburg yard once already this year, though no details of the work have been confirmed officially. Yacht Journal reports that the work had to be paused so Abramovich could to enjoy a summer holiday on board Eclipse.

Since little information about her exists in the public domain, it’s lead to many rumours of secret design features such as a missile defence system and protective bullet-proof windows. The rumour mill also claims a cinema, disco and a Formula 1 simulator were added earlier this year.

The latest reported refit marks the end of a busy summer season that saw Eclipse savour the less-frequented superyacht destinations of northern Europe. Abramovich spent five days on Eclipse during a cruise of the Scottish islands, when he was photographed enjoying local tourist sites such as his tour of Scotland's best whisky distilleries. Since then, Eclipse has been spotted in Turkey.