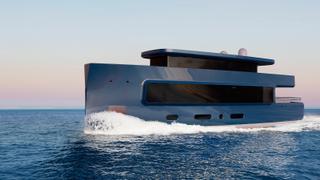 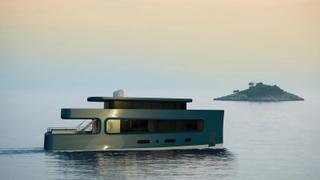 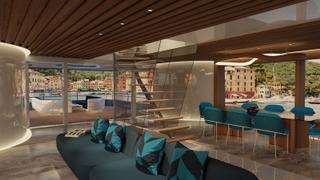 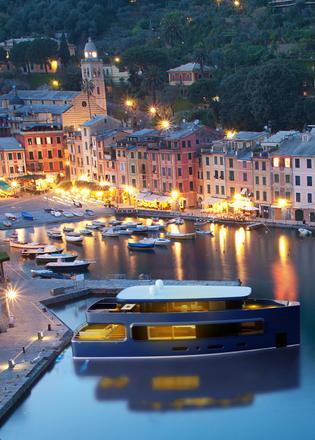 Amsterdam-based designer Isaac Burrough has released his latest concept, a 28 metre motor yacht that draws inspiration from the world of product design.

Eschewing the more commonplace reference points of architecture and automotive design, Burrough adds: “My goal was to look beyond the usual sources of inspiration for the yachting industry, to create a design that is both calming and welcoming.”

The resultant design aims to combine functionality with elegance and simplicity with a striking aesthetic through the use of long uninterrupted lines, large clean surfaces and bold rounded edges.

Mediterranean living inspired both the exterior and interior with the hull finish described as Santorini blue — a shade that is also picked up by the upholstery and soft furnishings in the saloon.

Accommodation is for up to eight guests, including a full-beam owner’s cabin on the main deck and a full-beam VIP suite on the lower deck. This is made possible by the vertical bow, which maximises the amount of interior space relative to the yacht’s length.

The crew quarters would be situated forward on the lower deck, giving room for a staff of up to four people and the garage can house a 5.65 metre tender as well as a Jet Ski, but the star of the show is the skylounge. Accessed via a central glass-sided staircase, this area measures an impressive 98 square metres.

New Zealand-born Burrough adds that the flat coachroof was designed with solar panels in mind — an ideal option for an owner who wants to reduce their carbon footprint and create an eco-friendly yacht.