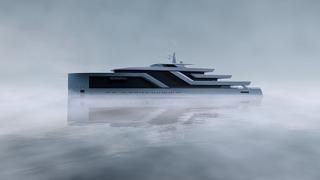 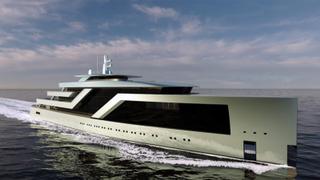 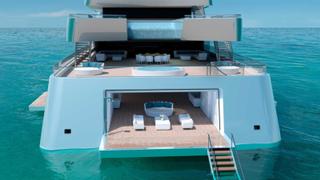 The increased bow height would create the need for two levels of hull windows, which Burrough solves by designing one large section of glass extending over both decks. This would result in floor-to-ceiling windows in the owner’s cabin and a three storey atrium designed to fill the main staircase with natural light.

The raised bow of the yacht, which would have a 17.1 metre beam, would enable the owner’s cabin to be extended forward to feature a private lounge, office, yoga studio, double en suites and two private owners' balconies.

The spa area, positioned aft of the owner’s deck, is dedicated to relaxation and incorporates a gym, sauna, steam and massage room. A 10 metre pool and two circular Jacuzzis, meanwhile, would be made completely of glass and accompany a 215 square metre beach club.

Al fresco entertainment areas are plentiful and feature a sun deck measuring 33 metres, equipped with a barbeque, bar and couches capable of seating 24.

The yacht can also accommodate five tenders; two for crew use and three for the guests.