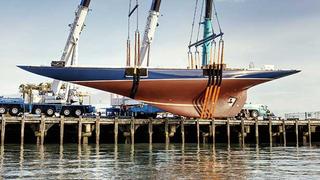 J Class yacht Endeavour splashed down this morning in New Zealand waters as her 18-month refit undertaken by Yachting Developments came to an end. Within hours her on-board systems were commissioned and checked, her mast was stepped, her boom fitted, and the iconic yacht was making her way to her berth in Auckland's Viaduct Harbour.

The yacht's comprehensive refit involved the removal and replacement of the weather deck and all deck equipment, the relocation of steel deck framing to accommodate the new deck layout, the replacement or upgrading of the main engine, generators, hydraulic systems, winches, electrical system, electronics, bow thruster and air conditioning, and the replacement of the mast and rigging with a new carbon fibre outfit built by Southern Spars to a design masterminded by Dykstra Naval Architects, who were also instrumental in the deck layout and structural engineering.

Her interior was also completely reconfigured and redesigned by Jon Munford and Adam Lay with work carried out by Yachting Developments' in-house team of craftsmen.

With an eye on longevity and serviceability, Yachting Developments took great care throughout the refit to preserve as much of the 77-year-old vessel as possible, while utilising 21st century technology for her sailing systems and functionality. Acknowledging her as 'something special', managing director Ian Cook said his team felt honoured to be working on such an iconic boat, and 'put their heart and soul into the refit'. Endeavour is one of the original J Class trio that have survived – fellow yachts Shamrock V and Velsheda have also undergone refits and development in recent years.

After sea trials and tuning up, Endeavour will be shipped to the Northern Hemisphere where she is due to compete in the 2012 J Class regattas in Falmouth and the Solent, which will coincide with the London Olympics.