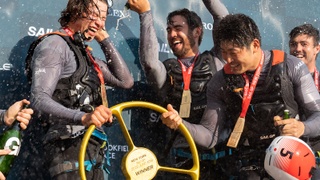 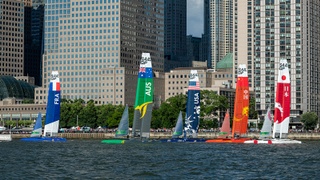 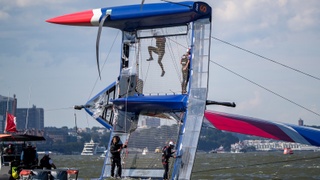 Japan has won its first ever SailGP, beating Australia to take the top spot of the overall leader board after a head-to-head clash in New York.

Six national teams competed in the third leg of the inaugural event, racing high performance F50 catamarans based on the America’s Cup AC50s.

The Japanese team, helmed by Nathan Outteridge, beat the Australia SailGP Team in the final race of the day. The two teams then faced each other in an intense final match on the Hudson River.

Boat handling and manoeuvring of the F50’s foils became challenging as the teams battled varying wind speeds and shifting breezes. The fastest speed of the competition was recorded after the Australian team racked up a top speed of 48.69 knots. But it was the adaptability of the Japanese team that won them the race.

Japan’s helmsman Outteridge said he was “relieved” by the result.

“The Aussies are, without a doubt, the team to beat, and I think now we are starting to even out the playing field and can’t wait until Cowes,” he added.

The United States SailGP team, led by Rome Kirby, came in third place while the British team trailed in final place after suffering a capsize that damaged their F50’s wingsail.

UK helmsman Dylan Fletcher said: “It’s been a disappointing weekend all in all for us – we learned a lot from out capsize yesterday, and I’m proud as a team of how we came back after that setback.”

The next SailGP race will take place in Cowes on the Isle of Wight on the weekend of August 10-11.

SailGP was established in 2018 by serial America’s Cup champion Sir Russell Coutts and Oracle founder Larry Ellison, to increase the sport's mainstream popularity, introduce sailing to the next generation and create a career path for extraordinary athletes.