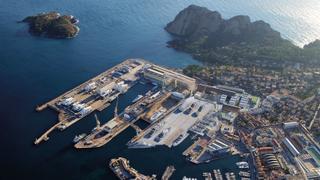 French refit hub La Ciotat Shipyards has announced a €100 million investment that will take place over the next four years to further strengthen its capability for refitting yachts over 80 metres.

The yard, which is run by the publicly owned company SEMIDEP-Ciotat, is now seeking up to three private operators to co-invest in a 40,000 square metre facility, served by 4,000-tonne lift, which would become operational in 2021.

Leases of up to 35 years are being offered and the work would begin in late 2019. La Ciotat Shipyards has set a deadline of February 2, 2018 for private partners to join the expansion project.

Jean-Yves Saussol, CEO of La Ciotat Shipyards, said that the notion of a sustainable partnership is essential to the success of the initiative. “Given the extreme rarity of possible locations for such equipment in the western Mediterranean area, this is a unique opportunity for operators wishing to expand in this market,” he added.

La Ciotat Shipyards currently owns a 10% market share of the superyacht refit industry and boasts a maximum shiplift capacity of 2,000 tonnes. Last year it reopened the great drydock, which has been enlarged to accommodate yachts measuring up to 200 metres, the first of which was the 72 metre Delta Marine superyacht Albatross.

Key superyacht refit yards already operating on the site include Monaco Marine, who recently announced plans to open a new site in La Seyne-Toulon, Blohm+Voss and Compositeworks, which was acquired by the Barcelona-based MB92 last month.