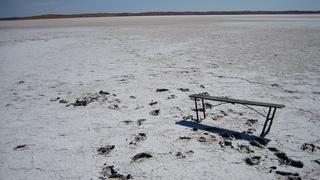 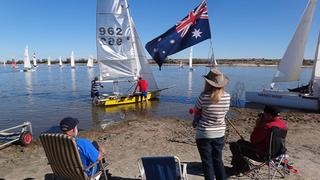 The Lake Eyre Yacht Club in South Australia is planning to hold its first regatta in four years – in the middle of the Simpson desert. Seasonal rains could bring enough water to the lake for boats to get back out racing for the first time since 2011.

Lake Eyre is Australia’s largest lake and the thirteenth largest inland body of water in the world, but the salt lake is dry most of the time. It hasn’t filled up completely since 1974, despite sitting in a drainage basin the size of Spain.

As superyacht owners seek more remote locations to visit, members of this yacht club have certainly found a way to satisfy their need for adventure, travelling into the desert with boats on trailers.

The club is located in one of the most remote locations on earth, about 700 kilometres north of Adelaide. William Creek is the closest community, at a mere 60 kilometres, but only has a permanent population of six.

Despite its out of the way location, the club has 220 members from all over Australia. There are even a few members from the United States, the United Kingdom and Germany.

With the lake only being full about four times each century, it is no surprise that members of the Lake Eyre Yacht Club are getting excited at the prospect of rain.

“This rain has primed all the Queensland rivers, which is great,” said Commodore Bob Backway. “If we have what is considered another rain event in the first half of February then it would be fantastic.”

“We’ll probably get boats out on the water in March because this time of year it’s just too hot,” added Backway. “But we’re hoping that this follow-up rain will bring a proper flood down from Queensland. We’re very excited about it.”

Members of the yacht club are not the only people looking to get a sailing fix in the desert, thanks to the rise in popularity of land sailing.

Video: How to get your sailing fix in the desert