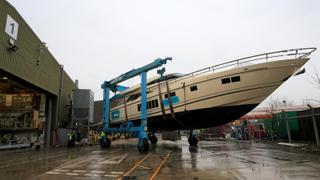 British yard Fairline Yachts has bid farewell to its 115th and final Squadron 78 yacht, which recently left the build hall at Oundle ahead of an imminent launch.

The yard’s flagship model, the 24 metre Squadron 78 was developed in collaboration with naval architect Bernard Olesinski and first introduced back in 2002. Despite its long-running success, Fairline has now set its sights higher, with an even larger model in development.

Russell Currie, managing director of Fairline Yachts, said: “The Squadron 78 is a yacht which offered power and style in abundance. It has had an amazing production run and has certainly paved the way for the next generation of large Squadron models. We look forward to sharing the details of our new flagship boat in the near future.”

Fairline has not released any specific details of the last Squadron 78, however the layout allows for up to eight guests in four cabins. Over the years both Caterpillar and MTU engine set-ups have been fitted for a top speed of more than 30 knots.

The news comes three months after the yard announced that it would be expanding to a new coastal facility near Southampton. Fairline Marine Park in Hythe is due to open this summer, and will be dedicated to building yachts over 18.29 metres.