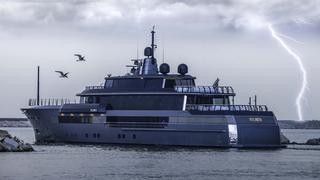 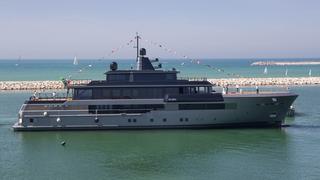 CRN has released a stunning photo of lightening striking in the background as its 55 metre superyacht Atlante is delivered. Hull No 134 from the Italian yacht builder, Atlante stands out from previous CRN yachts with her fierce military inspired styling. The steel-and-aluminium displacement yacht Atlante was launched in a private ceremony on May 9 at the CRN yard.

With a gun-metal grey hull, black superstructure, tinted glazing and aggressive lines, Atlante is a formidable figure on the water. CRN’s in-house team was responsible for the luxury yacht’s engineering, while design duo Nuvolari Lenard styled her exterior lines. The Italian design house has collaborated with CRN on a number of yachts previously, including 43 metre Magnifica, 46 metre yachts Clarena and Saramour and 72 metre Azteca. The interior design comes from Parisian design house Gilles & Boissier.

According to Nuvolari Lenard, she was created to meet the requirements of her owner, with a specific exterior look in mind, “aggressive, but at the same time proportionate,” said Dan Lenard. “Seen in her entirety, this is a high-impact yacht, whose determined military look becomes soft on the sea.”

Atlante’s creative layout makes good use of her 10.2 metre beam and five decks. As designer Dan Lenard describes it, there was a priority put on creating innovative design solutions to soften her aggressive styling and break down the barriers between indoor and outdoor living.

“We found some original solutions, such as a non-traditional bow and areas entirely devoted to guests, like the side doors of the main deck that, once the tenders have been launched, can be exploited to the fullest”, said Dan Lenard.

Powered by twin Caterpillar engines, the full-displacement yacht Atlante will reach a top speed of 15 knots and cruise at 14 knots. After fitting out and sea trials are complete, she will head off for her maiden voyage.

Now that she’s delivered, Atlante will make her public debut at the Monaco Yacht Show this September, due to be displayed along with CRN yachts Yalla and Saramour, which were launched last year but have yet to appear at a boat show.