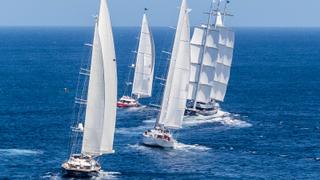 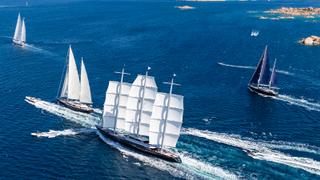 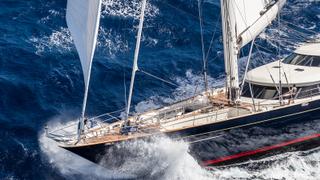 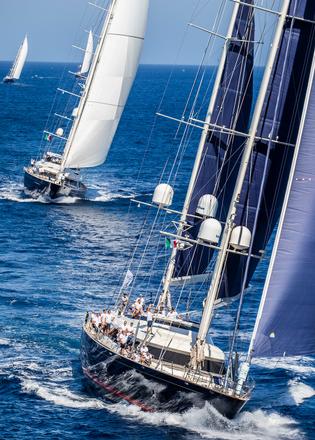 The triple-masted DynaRig yacht topped the eight-strong Corinthian Spirit class, ahead of 52 metre Tamsen in second and recently refitted Spirit of the C's in third. In the four-strong Cruiser Racer class, which allowed yachts to fly spinnakers, 50 metre Silencio took victory ahead of Seahawk and Victoria A.

The event, of which Boat International is a proud media partner, saw 21 Perini Navi yachts crowd the dockside in Porto Cervo, a spectacular turnout and well ahead of the 16 yachts that took part in the event when it was last run in 2015.

“I would like to thank everyone who took part in this edition of the Perini Navi Cup," said Lamberto Tacoli, chairman and CEO of Perini Navi.

"Our special thanks to the shareholders and the entire Perini Navi team who made this edition really special."

After placing fifth in the 2015 Perini Cup, Maltese Falcon was on a mission to improve her placing at this edition – and totally dominated each day's racing. Wind speeds of 18-21 knots on the first day and long downwind legs suited the supersailer.

Day two was much lighter, with breeze of 7 knots dying away throughout the day. But with her long waterline length, Maltese Falcon was able to move through the fleet after starting second to last. Day three proved the windiest of all, with the course shortened as wind speeds touched 27 knots, but Maltese Falcon was still able to cross the finish line five minutes ahead of second place finisher Blush.

A superb social programme accompanied each day's racing, including wine tasting from Marchesi Antinori and a cocktail event courtesy of Vhernier, but the highlight was undoubtedly the yacht hop after the second day's racing, which saw A Dock crowded with hundreds of people as yachts welcomed guests on board. The all-important cocktail competition, judged during the yacht hop, was won by 40 metre Principessa VaiVia.

Speaking at the conclusion of the event, YCCS Commodore Riccardo Bonadeo said: “This has been a unique edition, the characteristic Costa Smeralda weather conditions allowed us to complete the full racing schedule with three consecutive days of competition, allowing the Perini Navi yachts to perform at their best.

"I would like to thank our friends Lamberto Tacoli and Edoardo Tabacchi for this collaboration which has allowed us, in all seven editions, including this one, to organise a highly successful event – the perfect blend of spectacle on the water and ashore. Thanks to the owners and all the sailors who gathered in Porto Cervo over the past few days and thank you to the International Jury, the Race Committee and the staff for their essential and invaluable work”.