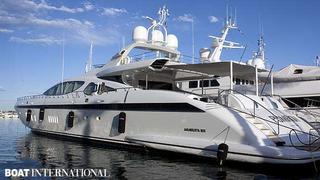 The Overmarine Group's latest Mangusta 165 superyacht has been delivered and was spotted in Golfe Juan, France, by Boat International.

This is the ninth hull in Overmarine's Mangusta's popular 165 series of superyachts. The 50 metre open maxi yacht is designed for performance, and the latest addition to the family is no slouch in this respect. She stands apart from her sisters thanks to her quad power package. According to Overmarine, she is the first Mangusta 165 to have four MTU engines.

The series yacht has a four-stateroom layout comprising a master suite, VIP stateroom and two guest staterooms. The spacious flybridge is primed for outdoor entertaining and relaxation, with al fresco dining and sunpads. A second helm station is also located on the flybridge.

This delivery comes on the heels of the launch of the Overmarine Group's eighth hull in the series, the Mangusta 165 E. Now yachts nine have been launched in the Mangusta 165 series since the initial debut of the first hull, Force India (ex-Salvaje), in 2007.