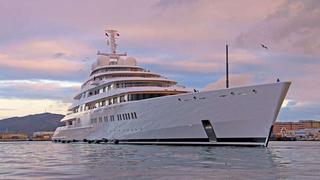 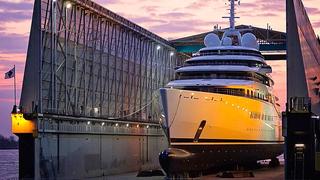 The megalophobic who faints at the sight of superyachts

Living in Liverpool Amy Carson should be well used to the sight of big ships but the 33-year-old apparently suffers from a condition known as megalophobia - a fear of large objects.

Not a condition often seen in GPs’ surgeries up and down the land, to those who are afflicted it is a sizeable problem. To be precise, megalophobia is a morbid or irrational fear of large objects. The majority of us, especially those associated with the boating world, find objects like the top 200 largest yachts in the world awe-inspiring but for Amy and her ilk they are a big issue.

General symptoms typically include anxiety or feeling uncomfortable and can sometimes result in a panic attack. However, despite her fear, Amy is drawn to look at pictures of large objects, such as Azzam the biggest yacht in the world, which take on living characteristics.

Miss Carson told press: “I'm scared of big things that are lifeless but move as if they could be alive; the worst is big boats. If I see them I break out in sweat and my heart races; I have fainted and had panic attacks when standing too close to them in the past. Despite finding them terrifying I find myself drawn to looking at them all the time.”

Initially Miss Carson thought she suffered from agoraphobia but she realised the fear she felt was related to being around big things.

“I realised I was getting stressed and started shaking whenever I had to walk past the docks. I began dreading it and finding other ways to go where I needed to go. By the time I was in my twenties I had got a job that overlooked the docks. I would find it hard to concentrate in the office and had to move my desk away from the windows.”

Research she carried out on the internet led her to online groups with similar fears and made her realise that she was a megalophobia sufferer. However, rather than seek treatment she has decided to embrace the condition as part of her character - even though it has occasionally interfered with her work as a photographer.

Ironically, she is fine once she is physically on one of these big objects, such as a ship or plane; it is just the viewing of them that makes her uneasy or worse.

No doubt then when the ‘Three Queens’ – Queen Mary 2, Queen Victoria and Queen Elizabeth – recently visited Liverpool as part of Cunard’s 175th anniversary celebrations Miss Carson was not one of the thousands watching from the quayside.