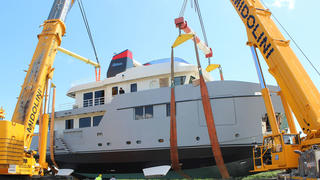 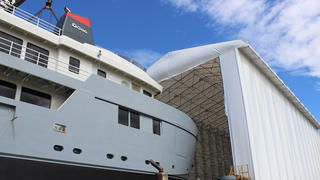 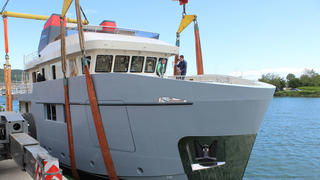 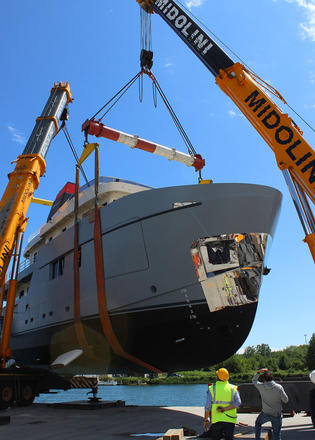 Designed and styled in-house by the Omega Yachts team, the Omega 101 Forte hit the water in Monfalcone earlier this month (May 15).

Interior images have not yet been revealed, but the tri-deck layout is believed to include four guest cabins and five crew cabins. Exterior styling is rugged and masculine, much in keeping with the current trend towards long-range explorer yachts. Her rising sheerline draws attention to the reverse-angled windscreens on the pilot house.

With an extra-thick steel hull and aluminium superstructure, Carolin IV displaces 350 tonnnes and has a broad 8 metre beam — creating more space on board for the custom-built interiors.

This rugged explorer yacht was styled in-house by Omega Yachts

Power comes from a pair of Caterpillar C32 engines for a total output of 1,500hp. Out on the water, this should translate into a top speed of around 11 knots. However, the new owner is more likely to value this explorer yacht’s 4,000 mile cruising range at 8 knots, thanks to her 57,000 litre fuel tank. Other key features include teak decks and four stabilisers to ensure maximum comfort on those long ocean voyages.

Carolin IV will now undergo final outfitting and sea trials prior to her delivery, which is scheduled to take place over the next few weeks.

Founded in the early 1980s, MMGI is a diverse shipyard with experience in constructing everything from cruise ships to military vessels. The Omega 101 Forte is the first launch under its new Omega Yachts brand, which will also spawn the 43.6 metre Moda series.