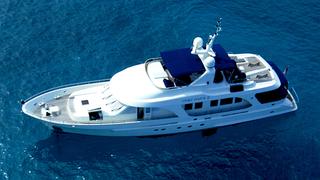 Moonen Shipyards in the Netherlands has received an order for a refit of the Moonen 84, Etoile d'Azur. Launched in 2007, this 26.25-metre motoryacht is still in the hands of her original owner, who had already crossed the Atlantic in her and now plans an extensive cruise of the Norwegian fjords and beyond. First, however, Etoile d'Azur will return home to Moonen for her refit.

Designed by René van der Velden, Etoile d'Azur is the seventh of eight Moonen 84 displacement motoryachts launched between 2002 and 2008. "It is a real pleasure for us to welcome back a yacht of this pedigree," says Niek van Twillert, head of design and development at Moonen Shipyards.

The project will include a comprehensive paint-job and the installation of an electrical zero-speed stabilisation system in place of the existing hydraulic system. Another major part of the refit will be an extension of the flybridge aft. This will serve as a cover for the main deck aft area, creating even more shading for alfresco dining. In addition, the enhanced flybridge deck space will facilitate the owner's desire to carry more watersport toys on board. Last, but not least, various cosmetic changes will be made to Etoile d'Azur‘s interior and systems, while the electrics will be updated where required.