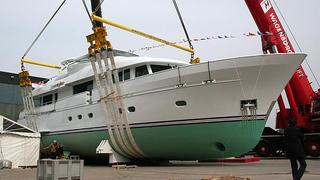 It was a prolific weekend for launches. As announced earlier this month, the 29.26m motor yacht Belle de Jour was launched by Flevoship.

According to Pieter Beeldsnijder, who designed Belle de Jour for a repeat client, she is a sophisticated 'mini-mega yacht'. The designer and the owner worked together on all details.

The comfortable interior, with Art Deco touches, accommodates six guests in a full-beam master and two double cabins which can be combined into a VIP. Belle de Jour was created to be helmed by the owner himself, and only a limited crew will be on board.

Lloyds registered, built in steel and aluminium, she’s powered by twin economical 440kW MAN engines giving a top speed of 13 knots. Special features also include a customized flybridge with a hidden area for a small car, two side balconies and enough space for two tenders.

Belle de Jour will be delivered in time for the upcoming season.