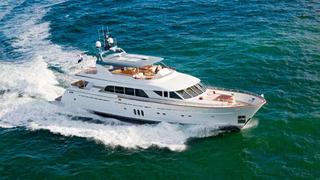 The new Mulder 98 Flybridge, the biggest motoryacht to be launched so far by the Dutch yard, has come out of its sea trials with a glowing report.

The 98 marks an ambitious step into superyacht territory for Mulder. She was signed in November 2013 and was launched for the HISWA in-water show near Amsterdam in September 2014.

The sea trials were conducted in the North Sea after the show out of Rotterdam and then from Scheveningen, under power from the twin 12 cylinder Caterpillar C32 engines, each delivering a maximum 1685hp. The motoryacht has a 17,000 litre fuel capacity, which gives her a trans-ocean range of 4,500 nautical miles at 10 knots.

A statement from the yard, in Zoeterwoude, said, “The technical sea trials have been very smooth. The beautiful round bilge hull reached a maximum speed of 22 knots, two knots more than expected and the low noise level of the 98-footer is admirable.”

Guido de Groot Design takes credit for the design, with naval architecture by Ginton Naval Architects. She will accommodate eight guests in four staterooms and a VIP suite, each with an en suite bathroom. The owner’s stateroom features portholes on both sides and a spacious walk-in closet. The custom built interior was designed by Omega Architects and is finished in walnut. The luxury yacht also boasts a large saloon with a dining area for eight.

Delivery, to a Russian client, is still scheduled for the spring of 2015 in southern France.

Mulder is increasing the size of its range still further with a 34m superyacht project under construction, due to be delivered to her owner in the summer of 2015. The 34m will be Mulder’s first over 300 GT.