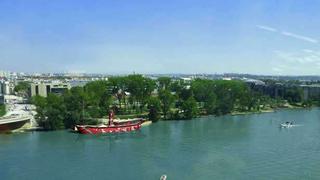 Two ageing industrial ships are being refitted and redesigned to create exciting waterfront cultural venues in Melbourne, Australia, and Lyon, France. Kwad design studio, appointed by the Batofar group, will undertake the refurbishment of a former commercial vessels, which are being painted in the style of the razzle dazzle warships of the First and Second World Wars, with a modern design concept by Antoine Damery of Kwad design in Paris.

A 1939 lightship is the basis for the Razzle project in Lyon, while the Dazzle project transforms an 1970s fishing and exploration vessel and will be based in Melbourne.

The razzle dazzle warships (pictured below) were painted not in traditional camouflage, but instead using confusing shapes and patterns – a different pattern for each ship – with the aim of misleading the enemy as to the ship’s direction, speed, intentions, distance and intentions. The success of the concept was difficult to judge. It was revived on the anniversary of the First World War last year with a party ship painted in razzle dazzle style which can currently be seen on the River Thames in London, UK.

The new Razzle and Dazzle vessels will be converted into flexible venues to host music, theatre, dance and film events, with a combination of performance spaces, restaurants, sun decks and cocktail bars. The ships are scheduled to open at the end of this year, in Melbourne’s Docklands area and in the Confluence area in the heart of Lyon, between the Rhone and Saone rivers.

The aim of the project is to forge links between Melbourne and Lyon and has been conceived as an extension of two cities’ artistic communities, with a series of exchange programmes forming a cultural bridge and highlighting Melbourne and Lyon as international cultural cities. The exchange programme will include artistic residencies, chef-swaps, cross-programme concert streaming and more.