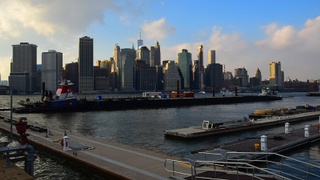 New York is rediscovering its waterfront roots as the city’s first new marina in more than 50 years prepares to open.

A major investment, building the ONE°15 Brooklyn Marina involved massive infrastructure work costing more than $28 million. Managed by Singapore-based conglomerate SUTL, the marina is preparing to open and operate at full capacity later this spring.

Located at the mouth of the East River, the ONE°15 Brooklyn Marina has more than 100 berths and can host yachts up to 60.9 metres.

It also boasts a cutting-edge system of wave attenuators, which placate the challenging tides and choppy waters of the marina’s location set between two rivers and the Atlantic Ocean.

The system of deep draft steel barges reduces the size and energy of the incoming waves and has led to ONE°15 Brooklyn Marina’s claim that it has the calmest waters in the New York harbour.

The construction of the eight-acre facility also included the expansion of the Community Dock, which is intended for recreational activities, such as kayaking and sailing.