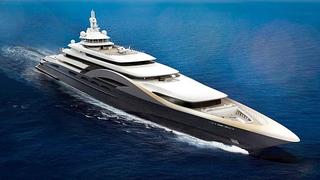 Yes, they are an anomaly, but yachts beyond 110 metres are where dreams and ideas originate. With discussions of 150 metre yachts and beyond in the works, German designers Roland Krueger and Katharina Raczek of Newcruise were asked for their vision for a very, VERY large yacht. They have called the resulting 180 metre (590’ 6”) concept My World.

With eight decks, it does seem a world of its own and includes everything a floating global headquarters would need including conference rooms, a helicopter hangar, dive clubs, cinemas, a private spa, sports club and submarines.

“Early in the development we realized that we needed to depart from conventional layouts, the size of the ship dictates, for example, that the central boarding will happen and not as usual via the stern. This allows us to use the stern for sport and beach clubs with large aft facing windows,” commented the designers.

Boarding by gangway or by helicopter, guests are welcomed into a lobby formed by an atrium-style staircase, which provides the link for all decks to be used by owner, VIP and guests. A central glass lift takes the visitors to their destination deck or to the skywalk observation platform right under the main mast, 24 metres above the sea.

Addressing the issue of where to house pilots, this design incorporates quarters for air pilots, special navigation area pilots and the captain on the bridge deck, which is located right underneath the upper helicopter deck and also provides an enclosed hangar for the helicopter.

The private owner's deck includes living quarters, private spa and hamam plus a private dining room and games area including a billiard table and fireplace, a gym and office spaces for the owner and personal staff.

The deck below the owner’s deck is designated for public spaces and a second helipad, “The farther forward you go, the more spectacular are the rooms,” said Raczek. Conference rooms lead to a dining saloon with a stage. Next are a series of small lounges and then an incredible nightclub with panoramic views forward over a “party balcony.”

Six VIP suites with balconies and 10 guest cabins are envisioned on the main deck level along with one of the cinemas and beach and sports clubs. The VIP suites are also served by their own staircase, which descends to the dive club and its terraces, swim platforms and toy and tender garages (for aquatic, amphibious and land vehicles). A pair of submarines can be launched undetected through a moon pool.

As befitting a yacht with a large permanent crew of 68, the vessel offers the crew its own sports club, cinema, outside crew recreation area and web café within three decks of crew, store and mechanical spaces. It also has a complete hospital with operating theater, sick bay and hyperbaric chambers.

Newcruise expects that such a vessel would operate on diesel electric power with azimuthing thrusters.