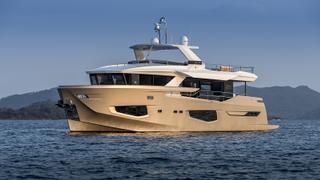 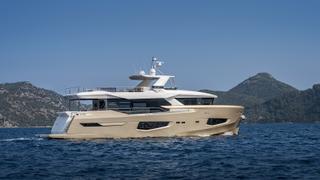 The news comes after the yard’s 26XP and 32XP yachts made their European debuts at the Cannes Yachting Festival in September. The first two hulls in the 26XP series, Gioia and Minella, were delivered earlier this year.

The compact composite explorer yachts have been sold to three clients; one in Russia, one in Turkey and one in the Middle East. The yard added that it expects to shortly announce the sale of the sixth hull in the series.

The yard said construction has already begun on the three new hulls and hopes to cut delivery time by up to four months. All three will be the displacement version of the 26XP and feature naval architecture by Umberto Tagliavini and exterior and interior design by Can Yalman.

There will be slight differences between the three new builds. The owners of the third and fourth hulls have opted for the same layout as Gioia and Minella, with four guest cabins below deck and a full-beam master. However, the fifth hull will sport an “unusual” layout with an extra cabin located on the forward main deck and a Jacuzzi on the flybridge.

The owner of the third hull has opted for a propulsion package consisting of two twin MAN 560-hp engines. The fourth and fifth hulls however will have the more powerful MAN 800-hp engines for a top speed of 16 knots and cruising speed of 12.5 knots

Numarine founder and chairman Omer Malaz credited the sales with a “highly successful” Cannes Yachting Festival. “The enquiries from potential clients are ongoing,” he said. “Following on from the two 26XPs already delivered, the third, fourth and fifth units are now in build and we fully expect to announce a sixth in the near future.”