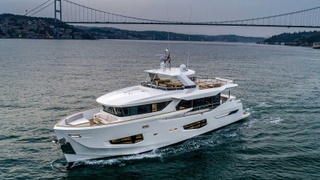 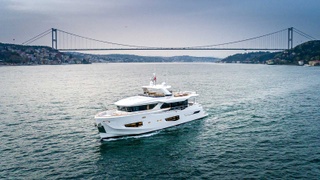 The third hull in Numarine’s 26XP series has now been delivered to her owner.

The Turkish shipyard launched and delivered the 25.68 metre pocket explorer yacht, which features futuristic angular windows and a vertical bow.

Exterior and interior design come once again from long term Numarine collaborator Can Yalman, while naval architecture has been handled by Umberto Tagliavini.

Accommodation is for eight guests in four cabins, comprising a master suite, two VIPs and one twin cabin.

The interior has been described as “spacious and refined”. One key feature is a large section of the saloon windows, which slides open to create a floating terrace over the sea.

There are also numerous social areas on board the yacht, including a spacious saloon and seating area at the bow, as well as an open dining area aft. The 2.5 deck yacht also includes a 55 square metre flybridge.

Founder and chairman of the Turkish yard Omer Malaz said: “We are excited to deliver another 26XP to her owner.”