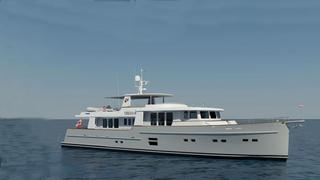 French yard OCEA has signed a new order for its Commuter 90 model, which is already under construction.

The Commuter 90 motor yacht is characterised by her robustness, reliability and simplicity. She has been designed by naval architect Joubert-Nivelt with long-distance cruising in mind – the Commuter 90 has an impressive range of 4,000 nm at 10 knots and top speed of 15 knots.

She has a maximum draft of 1.75 metres, allowing her owner to enjoy shallower cruising grounds, and a reinforced hull so that she can visit some of the world’s most incredible ice destinations.

A standout feature of the Commuter 90, penned by designer Pierre Frutschi, is her panoramic lounge, situated behind the wheelhouse, which has floor-to-ceiling windows so that passengers can enjoy views while on board. The interior also features four double guest cabins and one crew cabin.

The OCEA Commuter 90 is being built at OCEA’s yard in Les Sables d’Olonne and is scheduled for delivery in early summer 2016.

OCEA’s Commuter series offers a compromise between long journeys and family cruising. Influenced by the historical commuter yachts used in the New York area in the past century. These commuter yachts were designed for wealthy financiers in the 1900s, who would board the yacht at their mansions and cruise to the office. By 1902, there was a huge fleet of commuter yachts that would carry their owners to Manhattan Island twice a day.

OCEA is also preparing the refit of their first ever superyacht, Espiritu Santo.