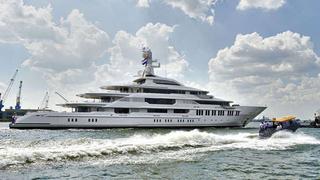 The 88.5-metre steel-and-aluminium superyacht features exterior styling by Espen Øino. Naval architecture is by Azure Naval Architects along with Oceanco's in-house team. The 10th yacht in Oceanco's Y series first arrived at the yardin April 2013 once her aluminium superstructure was completed by Aluship.

Oceanco stays busy with the build of Y711, the 84.8 sailing superyacht built in conjunction with Vitters, which arrived at Oceanco January 2014 and is expected to launch in 2015.