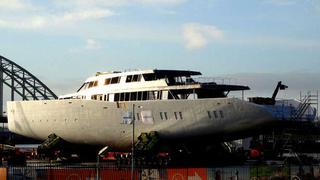 The hull and superstructure of an 85m sailing superyacht has arrived at Oceanco's shipyard in The Netherlands, giving a glimpse of the collaboration taking place between Dutch superyacht builders Vitters and Oceanco.

During a visit to the Vitters yard in 2012, a rendering on the wall of a massive sailing yacht brandished both the Vitters and Oceanco logos – this was an early hint to this project, and it's interesting to see her coming into fruition. The 85m aluminium ketch-rigged sailing yacht has been kept much under wraps. For Vitters, she is hull 3069, and for Oceanco she is hull Y711.

Bill Tripp / Tripp Design is responsible for the naval architecture and exterior design, while Dölker & Voges is the interior designer. The hull was built by Zwijnenburg, and the superstructure by Aluship. The 85m will now be finished at Oceanco, with delivery expected for 2015.

In the photo above, the new 85m sailing superyacht is seen to the right of Oceanco's recently launched 91.5m PA164 (hull Y709), which is presently finishing her sea trials. Oceanco's hull Y710 is still in the shed and will be launched in 2014.