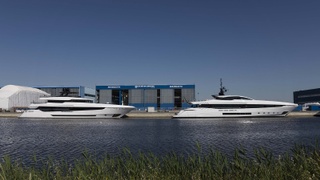 Both Alberto Mancini-designed yachts were launched at yard’s Pisa facility where final fitting out work is underway.

The fourth 43 metre yacht in the Mangusta Oceano displacement line, Project Milano, has been described as “a dream villa on the sea” by the yard, which has been “designed to perfectly blend into the environment”. It follows the delivery of the third Mangusta Oceano 43, which took place in March this year.

Project Milano, which will soon be cruising the Amalfi Coast and Caribbean, features wide glazed surfaces that flood the yacht’s interior with natural light. Large skylights connect the yacht’s decks, which feature glass doors and fold down balconies.

Other features include an infinity pool and waterfall forward, with a spacious beach club set aft.

Project Milano will have a cruising speed of 11 knots with a transatlantic range of around 3,000 nautical miles.

The Mangusta GranSport 45 Project Capri meanwhile has been commissioned by an owner who “plans less” and “enjoys holidays conceived on the spur of the moment,” the yard said.

The main deck has been described as “large, bright and comfortable”. Project Capri also features an infinity pool, waterfall and Jacuzzi for up to seven people on the forward sun bridge while the aft beach club area consists of three interconnected platforms.

Project Capri will have a maximum speed of 26 knots and a range of 3,500 nautical miles at 11 knots.