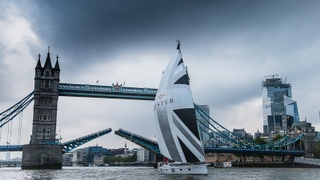 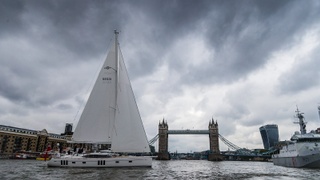 The 18 metre sailing yacht was unveiled at an event in London, which saw the yacht sail beneath Tower Bridge in the Thames.

Described as an “entry level” yacht, the 565 was designed by long-term Oyster collaborator Humphreys Yacht Design.

It is part of a new “generation of Oyster hull shapes”, the yard said, and has been designed specifically for family and friends sailing, without the need for a professional crew.

The new model is available in a number of different layout and keel options, including a sail plan for shallow waters and an extended transom for al fresco entertaining. Accommodation is for a total of six guests in three cabins; a master and two double cabins.

Rob Humphreys described the 565 as “a truly spectacular sailing yacht” that does “not compromise on comfort or performance.”

He added: “No need for professional crew, we designed her with the adventurous couple and young family in mind.”

The launch comes just a year after the British blue water sailing yard was bought out of administration by Richard Hadida Yachting. The yard said it now boasts an “almost full” order book from around the world with a number of upcoming launches on the horizon.

Chief executive Hadida added: “Words cannot describe the excitement I feel to see Oyster enter such an exhilarating phase in its evolution. The 565, fondly known as our “pocket superyacht” is everything an adventurous couple or young family could want.”