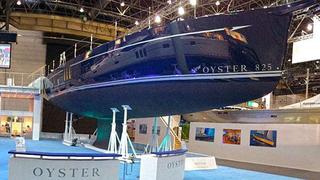 UK superyacht builder Oyster Yachts has announced it has signed a contract for a new build Oyster 825 sailing superyacht, sold to a Russian client.

The sale was finalised at the Düsseldorf boat show, where the hull No 1 of the new Oyster 825 series made her world debut and was the largest sailing yacht on display the this year's show. Proving a successful debut, Oyster was able to announce the new sale in the 825 series during the show.

'Making her world premiere here at Europe's largest boat show, this sleek model and new breed of Oyster yacht, designed by Rob Humphreys, is attracting many visitors and is already making a significant impact on the Oyster order book – bolstered by this latest contract, says Oyster CEO David Tydeman. 'With over one thousand Oysters sold in our first forty years and over thirty yachts in our current order book it is an exciting start to 2014, particularly this thirty-second* order for an Oyster in the 80ft (24m) and above superyacht sector.'

Capable of bluewater sailing and shallow water cruising, the Oyster 825 features a shallow draught and an all-external swing keel. Her ergonomic cockpit layout is designed for easy handling, and she boasts a twin rudder configuration.