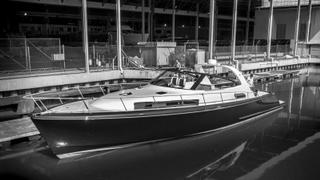 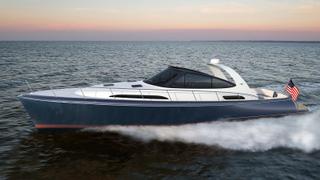 The 16.4 metre cruising yacht builds on the launch of the GT50 Salon Express and is built using the same hull and propulsion package. This comprises twin Volvo IPS 800 engines for a top speed of 42 knots and cruising speed of 35 knots.

The yard also revealed that development work is underway on additional models in the GT series.

The open plan main deck sees a social area located amidships with an L-shaped sofa and dining table to port. A command station comprising the helm and companion seats sits forward, surrounded by the carbon fibre windscreen. The use of carbon fibre decks helps lower the centre of gravity and improve stability, according to the yard.

Accommodation is for a total of four guests in two cabins; a spacious forward master and queen-sized cabin aft. The engine meanwhile is accessible from the helm deck.

The interior décor, meanwhile, has been described as “contemporary”, with designer fabrics throughout.

“Boaters in the sunnier parts of the world will enjoy the same performance as the GT50 Salon Express, but in an open layout that heightens the excitement of a day on the water.”