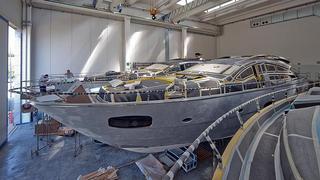 Pershing has released a progress report on its new Pershing 82 yacht, which was first revealed in December 2011.

The Pershing 82 is a 24.97 metre motor yacht designed once again by Fulvio de Simoni in collaboration with AYT and the Centro Stile Ferrettigroup. She features the familiar aggressive external profile of her predecessors, proving her pedigree. But new choices were made like the presence of a sundeck for models of this size (with access through an automated hatch and retractable carbon/steel staircase designed with Besenzoni), or the presence of large windows in the hull for guest accommodations.

Accommodation in the standard version is for eight guests in a master suite, VIP stateroom and two guest cabins, with an optional version comprising three staterooms and a lounge/cinema.

The Pershing 82 is powered by twin 1,792kW MTU engines giving a top speed of 45 knots, a cruising speed of 40 knots and a range of 300 nautical miles at a more economical speed.

The first hull will be technically launched at the end of July, and the Pershing 82 will make her official debut at the Festival de la Plaisance of Cannes in September.