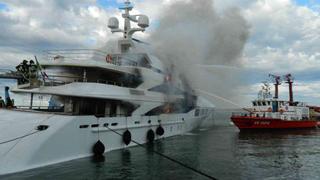 Pictures and official statement on fire aboard Benetti yacht FB261

As an update from yesterday's news of a fire breaking out on a superyacht at the Benetti shipyard in Livorno, Italy, Benetti has released an official statement.

The Italian yacht builder affirms that the fire broke around the morning of August 20 around 7 a.m. at the Morosini dock located inside the Livorno boatyard aboard the nearly finished Benetti FB261 motor yacht. The yacht was in its final stages of construction.

According to Benetti, the probable cause of fire was an electrical storm as a 'massive storm of lightning and electricity' had affected Livorno overnight. The builder's official statement reports that, 'The Benetti internal security/fire teams immediately showed up and, after having assessed the situation, activated the Fire Department of the city of Livorno.'

The fire was extinguished by 5 p.m. and no injuries were reported. The extent of the damage has not been reported by Benetti, but photos show that, unfortunately, the yacht fire had spread to multiple decks before being extinguished.