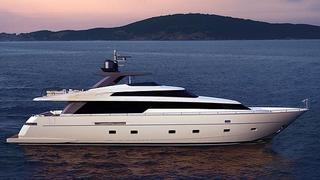 With no less than eight launches over 24m since the beginning of the year, including two 46m motor yachts from the Steel series, 2011 is already one of the best years for the pedigree Sanlorenzo yard which now announces the future debut of their new series, the SL94.

The SL94 is inspired by the successful SL104 series which introduced an evolution in the Sanlorenzo style. Like her bigger sister, large windows and portholes bringing a lot of natural light inside give contemporary lines to her silhouette. Designed by Francesco Paszkowski and the in-house team, this 28.60m motor yacht is built in composite at the Ameglia shipyard of the group. Special features include a flybridge (with hardtop as an option) that's free of a tender thanks to the presence of a large stern tender garage.

The first hull will have a modern interior designed by Francesco Paszkowski. Her layout accommodates eight guests on the lower deck in a full-beam open plan master suite, a VIP stateroom and two twin cabins.

The first unit will make her debut during the next Genoa Boat Show in October, but she have her worldwide première at the Yacht Club of Monaco on 23 September.