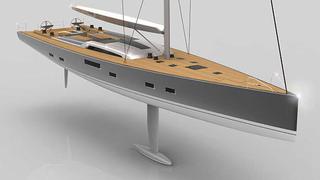 Nauta Yachts Design has announced that the JVNB 115 sailing superyacht is currently in the advanced stage of production at Finnish shipyard Baltic Yachts.

The 35 metre sailing yacht project is a collaboration between German naval architects Judel/Vrolijk and Italian studio Nauta Yachts Design, who is responsible for the yacht's general concept, deck and interior design. Both studio previously teamed up for another Baltic Yachts 35.5 metre sailing yacht project. Nigel Ingram of MCM is acting as the owner’s project manager.

Commissioned by an experienced owner who intends on racing in several regattas, the JVNB 115 superyacht is being built for speed and has a displacement of only 88 tons. Her high-performance hull was built using insights from a thorough CFD study and a pre-preg carbon sandwich. With a maximum draft of 5.85 metres, she also boasts a powerful sail plan with a 395 square metre sail plan, 280 square metre genoa and 940 square metre gennaker.

The sloop sailing yacht features a well-trimmed exterior with aggressive deck and hull lines, as well as a transversal hydraulically controlled jib sheeting for jib trimming. Her outer decks sport sunbed areas and a lounging area with fridge and showers.

The luxurious interior features a bright saloon with wide top and side windows, a bar, a large galley, and a comfortable lounge area. She houses a large owner's stateroom and three spacious guest cabins. She also accommodates crew in three cabins, including a Captain’s double cabin.