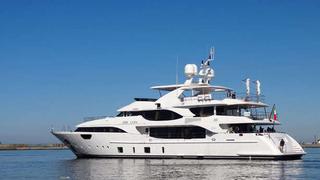 Delivered to her owner by Benetti at the end of last month, the 42 metre Luna was project managed by Burgess Technical Services (BTS) and has now joined the Burgess fleet of managed yachts.

The second yacht in Benetti’s Crystal 140 semi-custom series, the technical team at Burgess began their involvement with the project at its inception, assisting with pre-contract negotiations and specifications, followed by full support throughout the two year build process.

Built to LY2 code and flagged under Cayman Islands Shipping Registry with ABS Class Certificates, Luna delivers a top speed of 15 knots from two Caterpillar C32 ACERT engines with a range of up to 4,000 nautical miles at 12 knots. Accommodation for 10 guests in five cabins is configured as an owner’s suite, two double and two twin cabins.