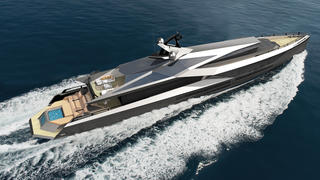 The striking exterior features wheelhouse windows that extended out of the superstructure to give better views out and let more light in.

Project Stella would also feature 280 square metres of exterior spaces, including an aft beach club with a swimming pool surrounded by sunpads. The tender garage below provides storage space for jet skis, diving equipment and various other water toys.

The upper deck will be offered as either a skylounge or an owner’s suite, with glass windows connecting the interior and exterior areas.

On the main deck, Project Stella gets a full-beam suite with fold-out balconies on either side, private office, walk-in wardrobe, and spa area. Guest accommodation below decks is split between four cabins, while the separate crew quarters are situated in the bow.

Power would come from a pair of 3,647hp MTU M90 engines for an estimated top speed of 24 knots. When trimmed back to her cruising speed of 14 knots, Project Stella’s would deliver a maximum cruising range of 3,000 nautical miles, thanks to her 60,000 litre fuel tank.

In a statement, Red Yacht Design added: “Project Stella’s clean lines and lean styling provide ease of manufacture. Thanks to Mengi Yay Shipyard’s experience, she can be built within 24 months.”