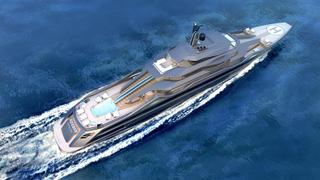 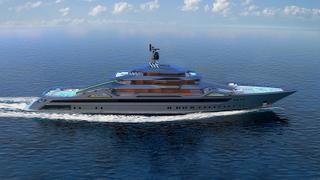 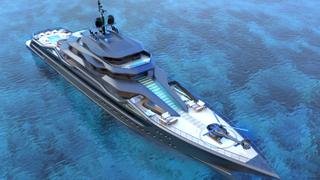 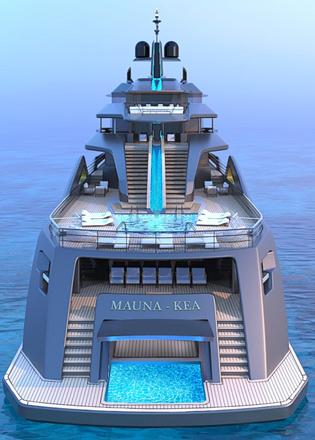 Developed in collaboration with brokerage firm SuperYachtsMonaco and naval architect Mario Grasso of Navirex, this steel and aluminium design has attracted the interest of Fincantieri Yachts, who would act as the build partner should an ambitious client come forward.

Drawing inspiration from its dormant Hawaiian volcano namesake, Mauna Kea features two large superyacht staircases that lead from the main deck to the upper deck. The forward staircase leads to the superyacht helipad, while the aft staircase is split in two by a central water slide that feeds the main deck swimming pool. In this way, the superstructure appears to melt, much like a lava flow cascading down the side of a volcanic mountain.

Accommodation is for up to 12 guests, while the large crew quarters would allow a staff of 22 people to cater for every whim. Other key features on board Mauna Kea include a full-beam owner’s lounge with its own private Jacuzzi, which is partially sheltered by the staircase arch but left open to the elements on both sides.

Take a closer look at the Mauna Kea concept

The hull has been designed around a top speed of 16.5 knots and when trimmed back to 12 knots, Mauna Kea would be capable of cruising for 6,000 nautical miles without needing to stop for fuel.

Based in the Italian city of Rapallo, Curtó has enjoyed much success in the small motor yacht market, winning multiple awards for his designs for Polish yard Galeon and RIB manufacturer Capelli. Meanwhile, Fincantieri Yachts has a strong track record in the large superyacht sector, having launched the 140 metre Ocean Victory in 2014 and the 134 metre Serene in 2011.